Bilal Khan: A Brand in Photography

Bilal Khan started working first with Studio Clix as a brand but later decided to proceed solo and nearly every Billboard in the country is shot by him if it’s a TV drama’s still. Whether shooting celebrities or models, individually or in groups, he tells stories though fashion photography in a sexy, tasteful manner. He has an appetite for excellence and continually succeeds at redefining visual culture, beauty, and art. His work is sexy and intriguing, reaching the core of his subjects in both his commercial & fine art endeavours. With grace, whimsicality, and softness, which is sometimes harder to achieve than a bright, in-your-face shot. He uses soft tints and shallow depth of field to crete evocative fashion photography. You can tell a never-ending tale of thought goes into the juxtaposition of his subject, the location, the clothing, and the props. In addition to that he has a number of independent fashion/photographed stories that are mind-blowing. Often abstracting elements of his images like hair, shadows, and poses, his work contains the boldness necessary for being outspoken through his pictures. His work is many styles in one – colorful gels, monochrome, hard, and soft. He draws out a lot of emotion from his subjects, both in their gestures and faces. Bilal Khan’s work is colorful, confrontational and full of narrative. He somehow keeps it serious and playful at the same time. If simplicity is the ultimate sophistication, then Khan’s work is the embodiment of actual simplicity yet creative in fashion photography. 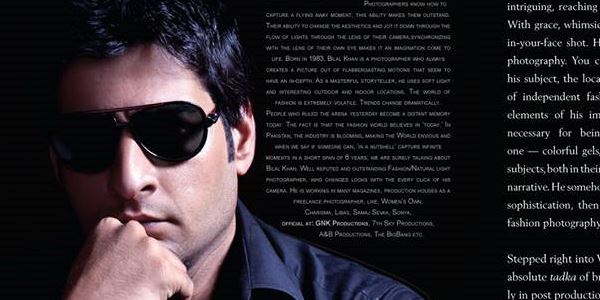 Stepped right into Videography as an experienced DOP, Bilal Khan is yet to reveal his absolute tadka of breath taking music videos and documentary projects that are currently in post productions.

Foot note: Bilal Khan’s photography is avant-grade and dramatic, if putting people in group together and creating patterns or bringing in nascent creativity while always being aware of how to mix high fashion with new ideas that he’s amazing at pulling off.